Please click on this link to view the scheduled hearings 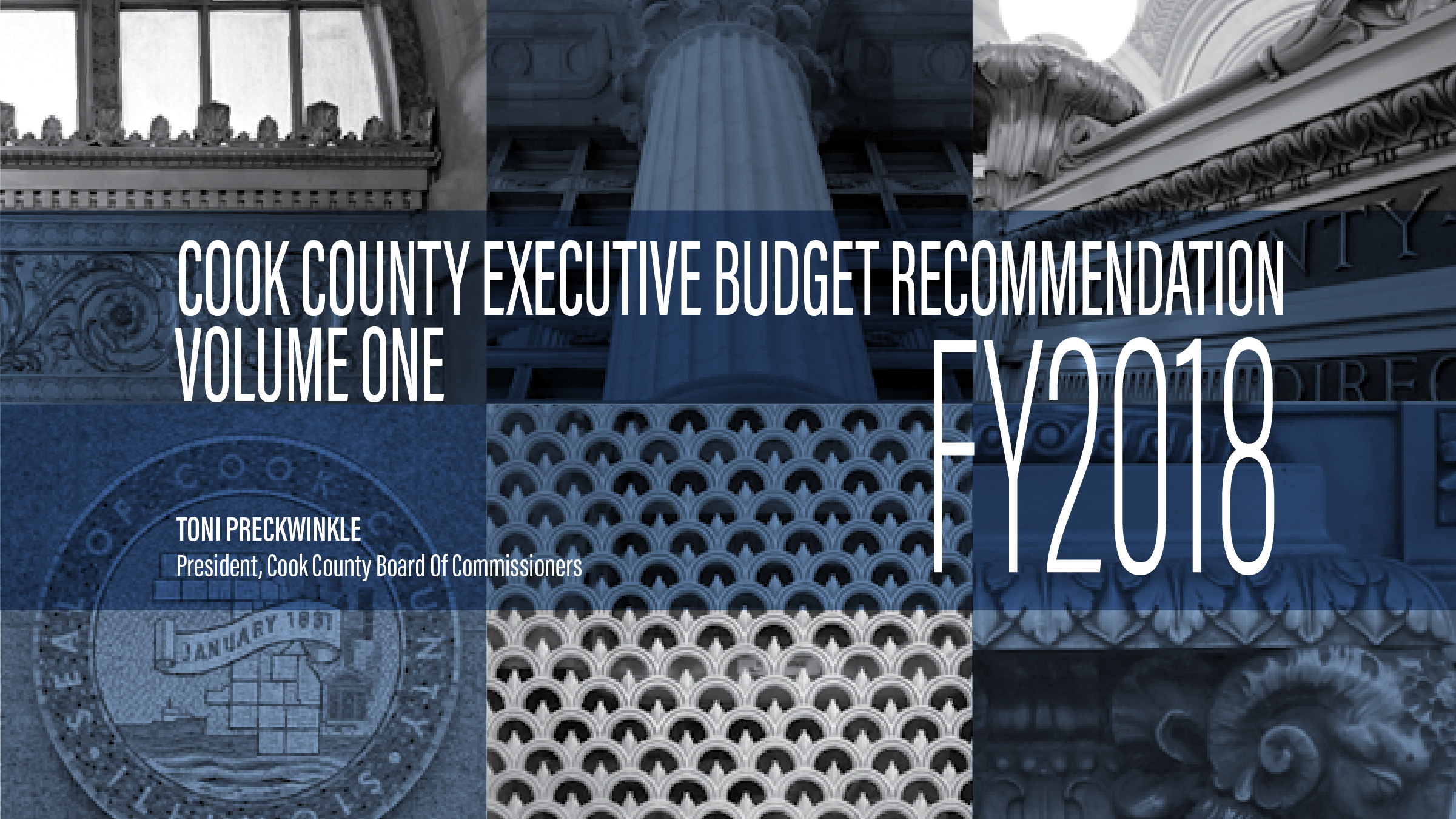 Proposal would close budget shortfall and avoid cuts to public safety services through staffing reductions & additional revenue, but commit to no new tax hikes for at least the next two years

“We’ve had to make a number of difficult decisions to create a balanced budget that provides essential public safety and public health services to County residents while being fiscally responsible,” Preckwinkle said. “Over the last six years, we have made important strides toward stabilizing the County’s financial outlook by making these kinds of hard choices, including reducing our staff by nearly 10%.  We will continue confronting our problems aggressively and make the tough but necessary decisions so we are not passing today’s problems to future generations.

This year, Preckwinkle said, there were two possible solutions, both difficult. “One, I could put forth a proposal that would devastate our criminal justice system over the next three years and undermine the progress we are making in public health,” she said. “It would mean more than 1,000 layoffs over the next three years, including prosecutors, public defenders, sheriff’s deputies and critical support staff. Instead of focusing on becoming more fair and effective, we would be focusing just on getting by.

“This budget, instead, calls not only for dedication to criminal justice reform, but a significant investment in public safety.”

The President’s budget closes a $174.3 million shortfall that was projected in June, driven by factors including gridlock over a state budget, growing legacy debt service costs, many flat or declining revenue streams and increased technology spending needed to upgrade antiquated and outdated systems.

Although the County has a diverse revenue base, expenditures continue to rise over time due to inflationary pressures, while natural growth in revenue struggles to keep pace or, in some cases, is declining. Minus funds dedicated to increased pension appropriations, operating funds for the General and Health Fund revenue would decline by $62 million absent any new revenue initiatives.

This makes structurally balancing the budget difficult, Preckwinkle said. Additionally, the County’s property tax levy historically has not kept pace with inflation, and, in fact, has lost some $300 million in comparable value since the 1990s.

The budget addresses long-term fiscal stability by reducing structural expenditures while preserving critical public health and public safety services. The County will be reducing the overall workforce as measured by full-time equivalents (FTE’s) by nearly 1% in FY 17.  Preckwinkle called this action a difficult one that includes about 300 layoffs. Added to previous reductions, the County’s overall workforce will be about 10% smaller since President Preckwinkle took office in 2010.

As part of its expense reductions, Cook County is further decreasing the operating tax allocation to the Cook County Health and Hospitals System (CCHHS) by $10 million to $111 million. This represents a more than 70%, or $280 million, reduction from the allocation the year before Preckwinkle took office, and follows continued progress by CCHHS in reinventing itself as a healthcare system of choice, which now serves more insured than uninsured patients.

And, she said, efforts continue at making Cook County a more effective and efficient government and improving services through management initiatives, such as:

Yet even with expense reductions, closing the budget shortfall will require additional revenue, Preckwinkle said. She is proposing a one penny per fluid ounce tax on sweetened beverages sold in Cook County. Importantly, the President has committed to not raising any other taxes for at least the next two fiscal years and will be including language outlining this pledge in a resolution. Yet even when this new revenue initiative is included, she noted, revenues are essentially flat in the General and Health Funds in 2017 versus 2016 levels.

“This should assure our residents that we mean what we say, and that we are adding a revenue component to this budget only as a last resort while supporting critical programs and pursuing a sound, long-term financial strategy, something the County has not always entertained,” Preckwinkle said.

A beverage is classified as sweetened if it contains either sugar or artificial sweetener.  The tax includes carbonated soft drinks, fruit beverages (excluding 100% fruit juice), sports drinks and energy drinks.  Non-sweetened beverages such as water, various kinds of milk and baby formula are exempt from the tax.  The tax is expected to provide $74 million in revenue in FY 17 based on an effective date of July 1, 2017.

Revenues obtained from the sweetened beverage tax will allow the County to double its investment in community-based anti-violence efforts and avoid additional layoffs in the public safety arena. In FY 2017, the County will dedicate $6 million to programs that center on anti-violence, anti-recidivism and restorative justice initiatives.

“We will designate a significant portion of our funding to support collective impact initiatives that work to address violence in our most at-risk communities, and allow us to strengthen the efforts of more community-based organizations working on the ground to support our larger effort to create safe and stable communities throughout Cook County,” Preckwinkle said.

Public safety reform, including anti-violence initiatives, has been a key part of President Preckwinkle’s policy agenda.  Recently, President Preckwinkle, the Cook County Justice Advisory Council and CCHHS have partnered to establish a Community Triage Center (CTC) in the Roseland neighborhood to deliver early intervention services for individuals who are at risk of detention or hospitalization due to behavioral health conditions.

The sweetened beverage tax should have the added benefit of improving resident health and ultimately reduce costs to CCHHS, as studies have shown that sugary and sweetened beverages are connected to numerous diseases and illnesses such as diet-related diabetes, cardiovascular disease, tooth decay and obesity.  It will also help fund a new community-based outreach effort on diabetes education and nutrition.

Noting the need for shared sacrifice and a balanced approach to closing the preliminary budget gap, the FY2017 budget includes nearly equal amounts of revenue increases and expense reductions. The County is proposing $78.5 million in expenditure reductions and cuts while the sweetened beverage tax is expected to generate $74.6 million in the coming year.

Preckwinkle said that in addition to layoffs, position closures and new revenue to support critical programs and services, the County will continue making important investments to modernize and reshape Cook County government, working on the demolition of old or underutilized tiers on the Cook County Jail campus while continuing to reduce the pre-trial detainee population. Since she took office, Preckwinkle has worked with public safety stakeholders to reduce the County Jail’s general detainee population by about 25%.

“By demolishing underused and antiquated divisions at the jail, we will reduce our campus foot print by 550,000 square feet, avoid more than $172 million in required capital improvement costs and save $3 million in annual operation costs. We are also continuing our work to shrink our real estate footprint by more than 1 million square feet by closing one of our three warehouses in the coming year,” Preckwinkle said.

“This has been an exceptionally difficult budget, but the end result will be a more responsive and responsible County government in the years to come.  I’ve been saying for more than a year that this would be a challenging budget. These decisions, though difficult, will help the County maintain crucial investments in our public safety system and support our efforts around public health during a time of need, structurally balance our budget and allow us to avoid further tax increases for the next two years.”

All budget information has been posted to the Cook County budget website, allowing the public to review documents and engage with the President’s Office directly. There will also be public hearings scheduled on the 2017 budget over the coming weeks.

To view the budget website, please go to cookcountyil.gov/budget/