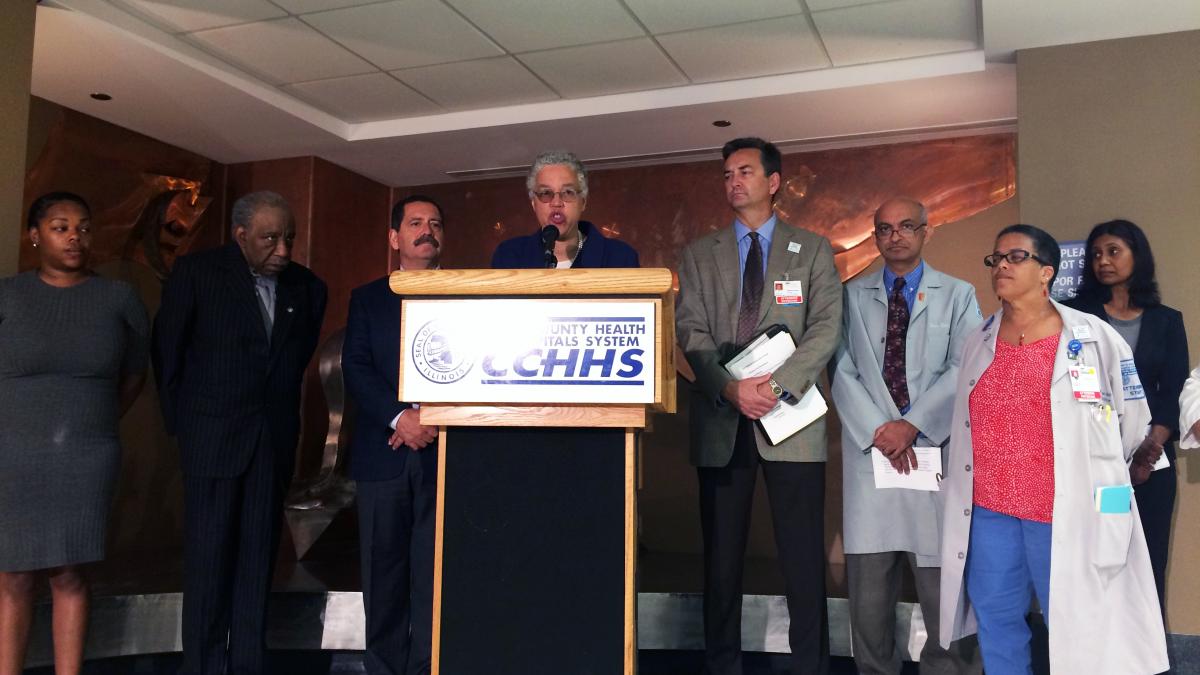 Cook County Board President Toni Preckwinkle and Cook County Health & Hospitals System (CCHHS) CEO Dr. Jay Shannon today joined other elected officials, medical professionals and advocates in endorsing the statement by the American Medical Association (AMA) that gun violence should be addressed as a public health crisis. During a press conference at Stroger Hospital today, President Preckwinkle and Dr. Shannon applauded the AMA’s announcement last week that gun violence requires a comprehensive public health response and solution. They further backed the AMA’s intention to actively lobby Congress to overturn legislation that for 20 years has prohibited the Centers for Disease Control and Prevention (CDC) from researching gun violence. “Gun violence, the root causes that lead to such violence and the easy availability of weapons are issues that we all need to confront in a multifaceted way, as this is more than just an issue of policing alone,” Preckwinkle said. “We must consider all of the contributing factors, human- and resource-related, that fuel this crisis. We are pleased that the American Medical Association is lending its influential voice to this issue.” “The physical, mental and societal toll gun violence has on victims, their families and communities is incalculable,” said Dr. Shannon. “Here in Chicago, and across the country, we must not only take a stand but take action. Empowering the CDC to conduct meaningful research on gun violence is key to addressing this crisis effectively.” Last year, CCHHS treated approximately 900 gunshot wounds. The first comprehensive trauma unit was established in Cook County and the unit, now at Stroger Hospital, remains one of the busiest in the nation. This year, through yesterday, the Cook County Medical Examiner’s office has recorded 366 homicides, 322 of them caused by a gun. During the same period in 2015, the ME’s office recorded 254 homicides, 214 caused by a gun. Last weekend alone, the office recorded 11 homicides caused by a gun. “Sound research can inform good public policy to address this crisis,” Preckwinkle said. “Prohibiting the CDC from conducting such research flies in the face of common sense and hinders our ability to address this national scourge. This crisis will not be solved overnight, but surely research into this public health epidemic is a critical step in the right direction. We must join the AMA, make our collective voices and call others to action.” “With approximately 30,000 Americans dying each year from gun violence, the scale of death is nearly on par with lives lost to the opioid epidemic and even to AIDS at the height of that crisis,” said AMA President Dr. Andrew W. Gurman. “Yet even as the United States faces a gun violence crisis unrivaled in any other developed country, the Congress prohibits the CDC from conducting the very research that would help us understand the problems associated with gun violence and determine how to reduce the high rate of firearm-related deaths and injuries. “As physicians, we rely on a science-based approach to problem solving. It is unfortunate and, indeed, counterproductive to prohibit even the most fundamental research into a gun violence – as thousands of our fellow Americans die each year.”