Find a location near you.

Highlights within the report include:

The Cook County Department of Transportation and Highways (DoTH), under the leadership of President Toni Preckwinkle, has established a partnership with Metra and Pace Suburban Bus to launch Fair Transit South Cook. 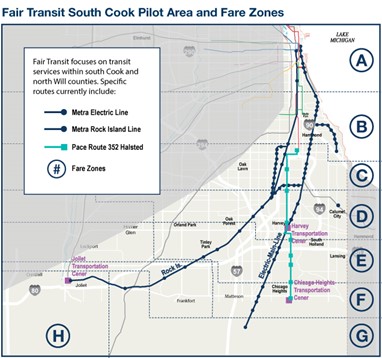 The three-year pilot launched on January 4, 2021 and offers up to a 50% fare reduction on Metra's Electric and Rock Island lines as well as increased service on Pace Route 352 Halsted. The program seeks to benefit commuters in the County's south suburbs and on the south side of Chicago.

Fair Transit at a glance:

View the reduced fare table for the Metra Electric and Rock Island lines.